6 Reasons Why I Wish I Was Straight

Dear The First Guy Who Asked Me To Have Sex

That Awkward Moment When Someone Votes Tory

0
Does anyone else find it difficult to control themselves when they find out that someone close to them is a massive Tory?
Sometimes it’s not a surprise, you can tell someone’s a Tory by what they wear (is that a Cotton Cashmere Crew Neck Jumper in Oatmeal from John Lewis and partners?) or sometimes you can tell by just how much of an arsehole they are.
I’m not saying that all arseholes are Tories, of course not, I wouldn’t like to generalize. Some arseholes vote for the Brexit Party and some don’t vote at all because they think it won’t make any difference.
I have a friend who’s a gay man and it kinda grosses me out. Not because he dates men, but because he only seems to date Tories. What’s wrong with you? You’re letting the side down mate.
I’ve never met a lesbian Tory, is anyone reading this a lesbian Tory? Could you please let me know in the comments a) why? and b) why? like why? I just don’t get it…
It’s like when you hear that certain run-down areas are Tory strongholds, and you’re like what? You mean that (insert name of area that is an absolute shit hole) votes Tory even though the place that’s full of council estates, food banks, and working-class people?
Do they think that the Conservatives are gonna help them?
Sure they are… Just like when the butcher ushers the cow into the abattoir and gives it a little cuddle right before he chops its head off.
So please, for this election, don’t vote Tory.

Dear The First Guy Who Asked Me To Have Sex 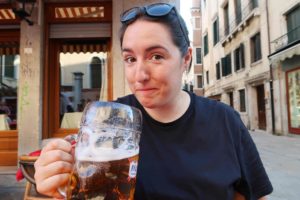 Hello! I'm Jenna, a comedian and writer of funny, lesbian and feminist stuff. I'm just trying to be my true weird self, but conditioning is a hard drug to crack man